Here are four of the early renderings but the large areas of black bleed through the pages and would be costly in ink to print. 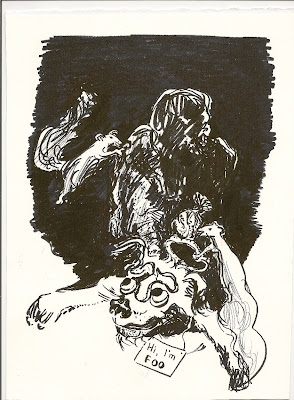 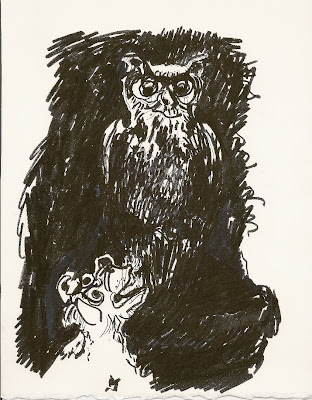 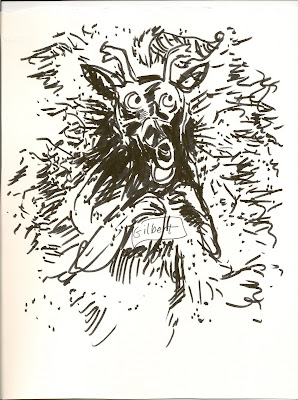 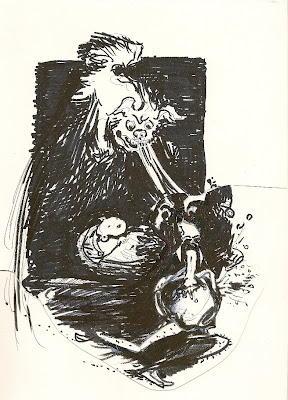 My inspiration for Foo came from my joyous but fiercely protective mixed rat terror, part Pomeranian, part toy poodle, 100% Seattle cosmopolitan. As I did more and more drawings Foo looked more like my dog and me. I became fascinated by my treasured memento from my grandfather Emil Widler. In particular two Foo dogs on tiny, carved stone chops. He used his chops in the late 19th century and first half of the 20th. One was a stamp of his Chinese name and the other the name of his FiNe Arts store on Bubbling Well in old Shanghai. Grandfather Emil a foreign native of the Orient, an old China hand whose scholarly enthusiasm for books gave my mother encouragement to make dolls to photograph as children's book illustrations. My mother then in return encouraged me and taught me by allowing me, as young as five years old, to finish her sculpted clay faces giving them the touch of life expression.
Now I am a grandmother and I began the illustrations the same way as I learned, by sculpting Foo in oil clay. making movement flow like clay does. My own style was polished by a trip to China and Tibet in 2003.
I shed tears of happiness to have a meaningful partnership with a cousin who I have not known until her brother found me through seeing my art work on the Internet. Like the Foo dog we have origins in Istanbul and have been shipped from port to port in the Orient. We trekked in the Himalayan Mountains, been in service of Queens and Emperors. Like Foo we have lost partners and have gone on to be protective and healing to the world where ever we are. Now working on Foo and Friends book we fulfill grandfather's greatest wish that we could go across the world to meet cousins like J. H. Sweet and bring the family together. Like grandfather believed books truly transport you through space and time bringing the dead, the living and the yet to be born together in a loving way.
I am deeply honored to illustrate Joanne Sweet's Foo And Friend's Series. http://www.jhsweet.com/
Posted by Diane Widler Wenzel at 8:00 AM No comments: